Jeremy James makes sculptures of people and creatures in high-fired ceramic. The work ranges from the observation of animals and birds watched directly in the wild to human figures that appear to inhabit a world similar to our own, yet intriguingly different. 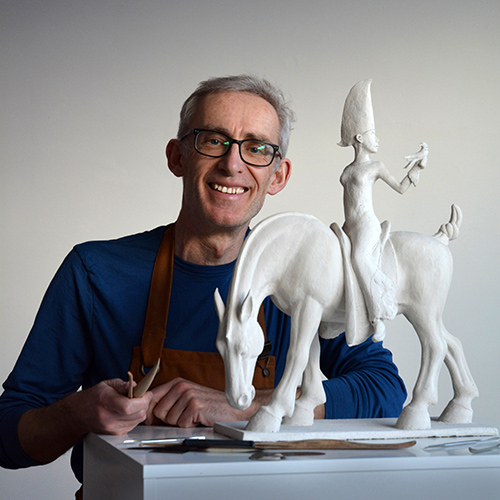 Jeremy's lino prints are colourful, energetic compositions, inspired by landscapes and creatures from Cornwall and East Anglia to the far North of Scotland.

Jeremy has made work as a professional artist for over 30 years, now living and working in Derbyshire, he was trained at Norwich, Exeter and Cardiff, his sculpture is held in numerous public and private collections throughout the world.

Potfest in the Park, Cumbria

Potfest in the Park, Cumbria

1989 Sudbury Hall, raku workshops with members of the public.

1990 Crafts Council, London. Workshops with the public and various schools running alongside 'The Decorative Beast' exhibition.

1995 Ferrens Art Gallery, Hull. Workshops with the public and schools to run alongside 'The Natural World' Crafts Council exhibition.

1995 'Fowl Play". A pilot project funded by the Arts Council in an Ipswich primary school, concerned with how different art forms can collaborate creatively in a teaching environment. In this case ceramics, dance and film.

1988 Ceramicist in Residence for one year to Derby College of Higher Education.

1996 Member and prize winner of The British Ice & Snow Sculpture Team at The 1996 Russian World Championships.

1998 Research visit to the Arctic tundra of Northern Lapland and Norway in order to gather information for a future touring exhibition, "Up North"