Jane Wheeler was born and raised in Norfolk. Following studies in ceramics at Bath Academy of Art, Corsham, she enjoyed a successful career designing hand-knit sweaters. She returned to ceramics in 2003. 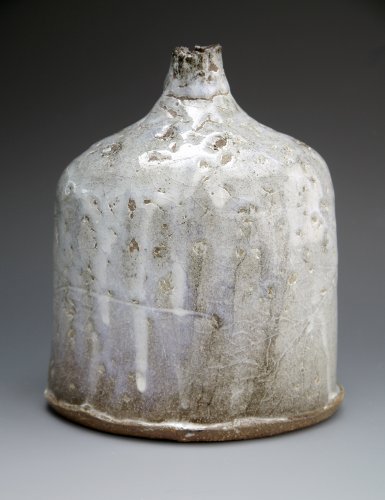 For Jane, the vessel is a space-containing hollow form that offers the richest language for working in clay. Its conceptual simplicity allows readings which allude to our most distant cultural pasts, and to the state of being human. Its limitations are those for which the potter's tools and equipment are designed; it is a familiar scenario within which to work.

Thus it becomes necessary for Jane Wheeler to make working and the work uncomfortable in some way, to push the boundaries in order to attempt discovery of new or hidden qualities of this profoundly significant, yet ordinary object.

Jane's vessels are reduction fired to 1260 degrees centigrade in a gas kiln. The rich textural surfaces are created by the addition of coarse grog (grit) and sand to the stoneware clay body- the impurities produce the irregular spotting, and by dry matt glazes composed of china clay, barium carbonate, magnesium carbonate, wood ash and feldspar.

Jane's influences are drawn from Islamic pottery, the work of Anselm Kiefer, Claudi Casanova and Tapies - her inspiration, from the saltmarshes and beaches of Norfolk coastlines, ancient British archaeology and geology.

Wall drawing installation for A. A. H. conference at University of Northumbria

On the Corner, Sunderland