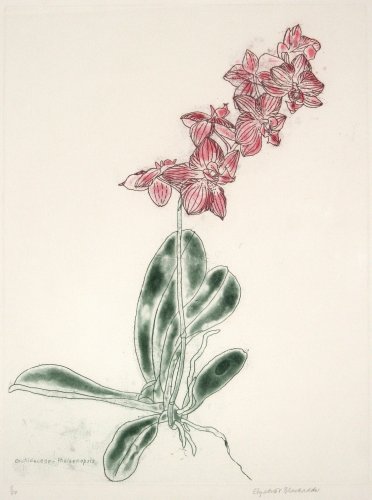 Born in Falkirk, she studied at Edinburgh University and Edinburgh College. In 1954 she was awarded a Carnegie Travelling Scholarship by the Royal Scottish Academy, and travelled through southern Europe. These travels inspired her early landscapes and influenced the way she saw the world around her. Initially her artwork was more experimental, influenced by the American artists Jackson Pollock and Mark Rothko. It was during her travels to France she became more aware of the painter Henri Matisse and her palette became more colourful. In 1956 she married fellow artist John Houston.

She made no secret that some of her arrangements of forms and colours were greatly influenced by Japanese aesthetics, and she was a regular visitor to Japan. Typical compositions are arranged through a process of setting out groups of miscellaneous objects on her studio table and depicting them from above.

As a printmaker she experimented with a range of printing media including lithography, etching, aquatint, dry point, woodcut and screen-print. Her work has been shown extensively in exhibitions in Britain, Canada, Germany, USA, Japan, Brazil, Australia and Russia.

Elizabeth Blackadder was awarded an OBE in 1982 and lived and worked in Edinburgh.