David Morris was born in East Yorkshire in 1948. He studied Graphic Design at Hull College of Art, graduating in 1972 and went on to work in top London Advertising Agencies before embarking on a career in teaching Graphic Design and Advertising. 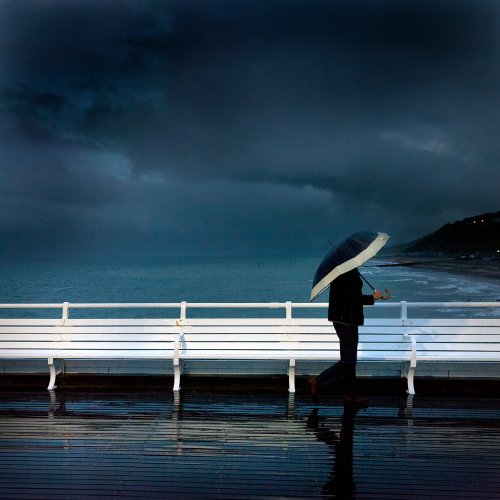 I work in colour, monochrome and infrared.

Living on the sea's edge at Cromer means when the light is at it's best I'm quickly aware of it and able to make the most of any photographic opportunity.

A long-term study of the places people go to find others or be alone. All life takes place in bars from the beautiful to the banal. Interesting faces, dramatic lighting and strange stories captured mostly in Italy, France and Amsterdam.

Taken mostly in the hours of dusk around Cromer and the Norfolk coast.

The 'Snowfall' photographs loosely fall under this heading, although they were captured in the dark as the dawn started to approach. Using a handheld camera with a very high ISO, the resulting images break up in the darker areas as the camera struggles to capture the light, but I liked the end result which often has an undefined, rougher appearance, more like a painting than a photograph.

The Household Cavalry visit Norfolk every year. Their Colonel gave me permission to go behind the scenes and photograph the Regiments visit to the county, he liked my black and white and colour work, but said nothing about the Infrared images.

Infrared has a Magical Romantic or Gothic Horror look that depends on the time of day the image was taken. It's quite unpredictable and is a 'Marmite' process, you either love it or hate it.

I love it… I guess the Colonel was less keen.

Peter Jay who owns the Hippodrome Great Yarmouth gave me permission to go back stage and record the work of the Circus and her performers. It's a view of the Circus that the public don't generally get to see.

It was a fabulous experience. But it took me some time to become accepted and then ignored. Which is exactly what I wanted. It's the job of a reportage photographer to merge with the furniture and capture life in its reality. This body of work is called Limelight and shadows - a study of the Circus and her

performers behind the painted smile.

THE GIRL WHO DANCED INTO AN AQUARIUM:

This is the dancer Louise Tanoto, a member of Tilted, a dance group led by the talented choreographer Maresa von Stockert.

The group performed a series of very inventive set pieces along the Norfolk coast. This was the final scene of the day, a partly filled aquarium stood next to the sea. A dancer approaches the aquarium curious about her discovery. She becomes mesmerized by the tank, so much so that I thought, "she's not going to dance her way into that is she?" She was, and she did.

These images were made using an infrared camera. An infrared camera reveals a place of black brooding skies, dramatic white clouds, anything green rendered the dead white of a nuclear winter. The skin of humans takes on a marble-like luminescence, lips and eyes betray only a hint of colour. It's a strange place of Gothic horror and Romantic beauty.

2010 Winner: Reportage section of Black & White Photographer of the Year.